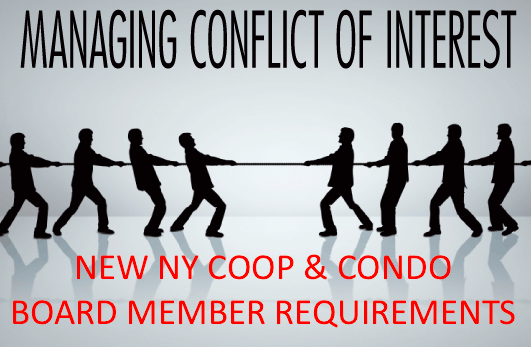 As we previously advised, as of September 2017, New York Business Corporation Law (BCL) Section 727 requires condominiums, cooperatives and homeowners’ associations incorporated pursuant to the BCL (and the Not-for-Profit Corporation Law) to issue an annual report to all of its owners/shareholders. The report, signed by each board member/director, must disclose whether any contracts were made, entered into, or otherwise voted on by the board where one or more of the directors was an interested member/director. Most New York City condominiums were not impacted because the vast majority are not incorporated pursuant to the BCL or the Not-for-Profit Corporation Law, but rather the New York Real Property Law.

The law will make it more difficult for cooperative and condominium managers and boards to deal with board member conflicts of interest.  Conflicts of interest in contract making can no longer be overlooked and must be reported to condo owners and coop shareholders.  The New York Legislature is clearly pushing coops and condos to be transparent with owners and shareholders.

The first new requirement is that condos, coops and HOAs must give each board member a copy of the applicable law at least once annually.  Boards and management need a way to track when board members are given copies of these laws as it will be essential to prove such sometime in the future. Compliant record keeping is essential.

Imagine a board deciding to enter into a vendor contract and the board president’s brother-in-law is the vendor. This interested transaction must be reported as it presents a potential conflict of interest.  Fast forward two years from then and the board and board member are sued relating to the contract and the conflict of interest that was not reported.  The board showing that the proper documentation was provided to each board members at least annually in accordance with the new law and that the board and board members other than the president had no idea of the president’s conflict would be essential in establishing a defense in a lawsuit.  Otherwise, the board is exposed to potential liability for not complying with the law.

In addition to providing the right documentation to board members at least annually, board members have to provide an Annual Report to owners. BCL 727 sets forth specific information that must be disclosed in the annual report, including a list of all contracts, the amount and purpose of the contracts, meeting attendance, and how each member/director voted. And, even if there were no transactions qualifying as interested director transactions for disclosure, boards must still issue the report and state that no actions taken by the board were subject to the annual reporting requirement. Boards should consult with counsel in drafting the annual report. The Annual Report must be signed by each of the board members.  If there were covered actions by the board during the year, then the board must provide information on any contracts made, entered into, or otherwise voted on by the board that were considered related party transactions in the case of incorporated condominiums, or where one or more of the board members were interested.